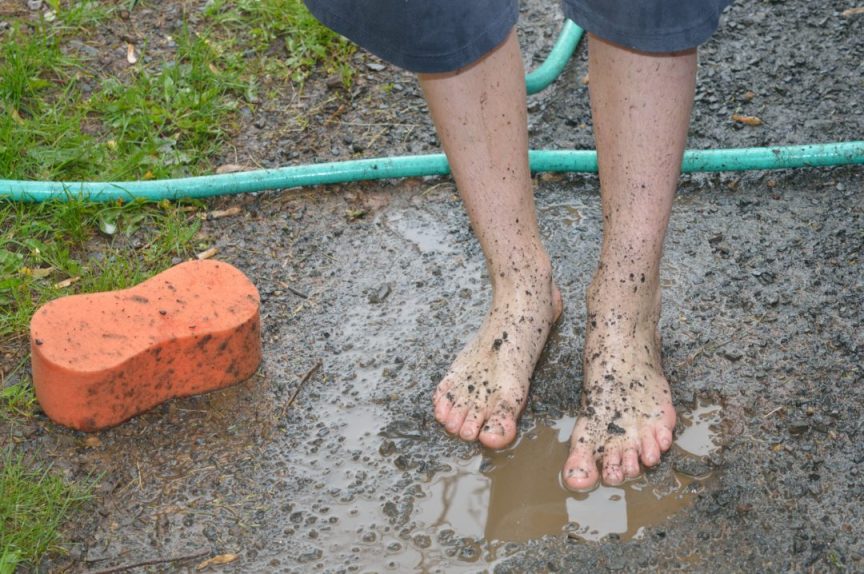 Sometimes you need to know how to remove mud. Peter and Kate were quietly helping out their kid’s footy team with the canteen each week when a committee member came and asked them for feedback over a problem they’d found. In good faith they gave it, only to find themselves in the middle of a power struggle where their good name was trampled by both sides in a war for control of the club. They hadn’t intended this and they weren’t committed to anything but improvement – yet here they were being attacked and smeared with innuendo.

Good people are sometimes caught in messy situations. Pete and Kate, devastated at the turn of events, were wishing they’d never volunteered to help when we spoke. Unfortunately, mud slinging happens in sports clubs, schools, workplaces and anywhere else you find humans. Often it’s a useful way for dodgy people to deflect the focus or shift blame off themselves and their less-than-desirable behaviour.

If you go to the country after it’s rained – even just to watch your kid play football- you’re likely to get muddy. The world’s not always a clean place. Yet when you get back to ‘civilization’, you’ll probably do certain things to start reversing the effects of the experience. You might take off your shoes. Turn on the heater. Or go and have a shower. Things to help you recover and remove the negative effects of the mud.

In the same way, there are actions to consider when you’ve had an experience of metaphorical mud slinging. Here’s five suggestions for removing mud that’s been thrown with words and actions rather than physically.

1. Remove yourself from the situation

The first (and obvious) thing to do is get out of the mud slinging arena as quickly as you can. After all, it’s going to be hard to remove mud when you’re standing in the middle of it.  This includes not throwing it back, tempting though it is to indulge in a little temper tantrum. You’ll only escalate the situation.

How can you walk away from the person(s) throwing this nasty stuff at you? If you’re in a work situation and you can’t/don’t want to quit, can you move sideways? Limit the times and ways you have to be near the one intending you harm? Although your initial answer’s likely to be no, with a problem solving mindset you’ll probably come up with a few somewhat helpful ideas to keep you and them apart.

Put in boundaries if you can’t move out. Refuse to meet with that person on their turf, on your own, or in a set up showdown. Peter and Kate did this by writing a letter to the whole committee explaining what had happened and threatening to stop helping if the insults didn’t cease.

When others are saying and doing horrid things, it’s easy to get bogged in wondering why. Good people can spend endless hours trying to figure out what they inadvertently did wrong to cause the mud to be thrown. If, after a serious ponder, you can’t think of anything, stop trying to make something up. It’s possible the problem is simply the other side.

Second guessing the motivation may make you feel better – after all “He’s out to get me” sounds justifiably awful – but it isn’t going to solve the problem. And it may make you feel worse. We know from research that even innocent people get tainted by association with the baddies. That’s why stepping away’s your first action. At the end of the day, throwing mud is wrong. Deal with their wrong behaviour and leave the why out of the conversation.

Miserable though it sounds to say, mud slingers are often politically smart. If the issue really matters to you, consider what you can do to protect (or re-build) your reputation. You don’t want that mud to stick. Tipping people with influence off that something’s happened is an option to think through, especially if they can offer you some protection.

You should also know that some people, once challenged by you, will adopt a less obvious attack plan. They’ll start implying you’re a bit of a disappointment, not so clean as they hoped, or that they heard you had problem x and it’s such a shame. Nothing will be overt anymore and no lie will be so obvious as to be outright challenge-able, they’ll just ruin your reputation by degrees. Warning others upfront to watch for these subtle smear tactics is about your only hope of ever counteracting this.

Denying that this incident’s made you mad or hurt you won’t change things at all, so don’t fight your feelings. That’s only going to hurt you more. Instead, name them and face them head on. It’s far healthier to do that and then work through them because eventually you’ll have to get to the other side of the experience and keep moving on.

It can be helpful to use your values in dealing with the situation. They’ll probably be clear by the things you’re mad or hurt about.  Choosing to stand for things which are good and to live with integrity builds your character. Use your affirmation of this aspect of yourself to affirm your worth.

5. Enlist the support of your team

Finally, don’t try to remove mud completely on your own. Find and lean on any friends or supporters you have within the situation. And enlist your family and friends for support generally too. Ask them to affirm you. Ask them to be watching out for how you are. Tell them when you need someone to give you a hug or take you for coffee cos you’re feeling pretty awful. You may have to allow for people who have limited skill, but still they’ll be trying, and that’s a good start.

May you never need to know how to remove mud – but may you get it off yourself quickly if you do!